Marijuana, Its Effects and Life Insurance

Cravings for the dried and shredded mixture of the cannabis sativa plant can always be overwhelming. It is almost impossible to part with the feel good factor or that pleasant sensation that marijuana smokers feel within minutes of inhaling it.

But along with that short lived good feeling, Marijuana is often associated with many negative effects such as loss of coordination, memory loss, impairment of judgment or wrong perception. On several occasions it has been found that marijuana users often engage in rash driving leading to road accidents or risky sexual behavior where they are easily exposed to sexually transmitted disease such as AIDS.

Within minutes the heart rate also increases leading to more blood flow in blood vessels which can be clearly recognized from the red eyes of marijuana users. The heart rate can go up to 130 beats per minute; almost 50 beats higher than a normal heart rate.

Marijuana users are not unknown to these facts, particularly when they are not under its hallucinating effect. They are usually well aware of the dangers of addiction. But then, if it had been that easy to get away with it, it wouldn’t have been termed as addiction. Marijuana users are often on the lookout for insurance companies which can provide them coverage.

Regardless of the fact that Marijuana is being used medically, the U.S. government still categorizes marijuana as Schedule I controlled substance. Moreover, insurance companies aware of the negative effects avoid giving coverage to marijuana users.

Even if users are given coverage, they are classified under the category of cigarette smokers and are charged three to four times higher than normal premiums.

Apart from the main psychoactive ingredient, marijuana is used to cure some very complicated diseases and as per some scientific evidence it can alleviate the symptoms of cancer. In this instance, marijuana is not really as malignant as cigarette smoking. 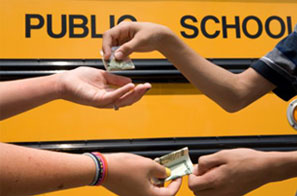 Marijuana is the most popular drug in America as it is regarded as relatively safe and around 39.8% of Americans have tried it at least once in their lifetime. It is more prevalent among young adults aged 18-25, but the trend is going down in this segment of population.

The best excuse for this segment is “everybody’s doing it” and so they don’t want to be left behind.

Fortunately, to the satisfaction of many, there was a decline of almost 20% from 1991 through 2007 among all three grades combined. However, in the year 2009 and 2010 there has been a slight increase in the number of marijuana users.

The danger with marijuana is that it is considered as the “gateway drug”, it is quite likely that such users may move on to more dangerous and harder drugs like cocaine and heroin.

Apart from fifteen states including Washington D.C. marijuana is still illegal in most parts of the country. Use of medical marijuana is allowed on the fulfillment of specific criteria. There are several issues raised by the insurance industry on the medical use of marijuana.

For example: for veteran’s administration’s beneficiaries it is almost impossible to get approval for medical marijuana, as federal law has labeled it as illegal. In the case of life insurance, some insurance companies are of the view that since illness doesn’t make you ineligible for coverage, using marijuana will not disqualify you either, whether it is used for medical purpose or not.

For the purpose of life insurance, smoking is related to only nicotine based products. So even if blood or urine tests show that you are a marijuana user, it does not classify you as a smoker.

Marijuana users, on the other hand, must disclose in case they have used marijuana in any form in the past five years. Using marijuana may be legal in the place where the person lives, but technically it is still illegal. And in case the person answers “no” and it shows up in the test then, the person will be automatically disqualified on grounds of manipulating the information.

People who answer “yes” may not be offered the very best rates but it certainly won’t push them into smoker’s class, neither will they be denied the coverage.

Keeping your marijuana use report confidential

As per law, insurance companies are required to keep the medical reports confidential, so even if the blood or urine report tests positive for marijuana use, law enforcers or government officials will not be told about the same.

The data on the application is sent to the Medical Information Bureau, after having consent from the applicant. The MIB is a non-government organization and provide services to health and life insurance companies through the nation, but need not to worry, as the government can’t access MIB database.

Marijuana has never been categorized as carcinogenic, has no negative effect on internal organs, on the contrary it has been used to relieve discomfort and nausea associated with AIDS and cancer. But since it is smoked along with tobacco, it falls in this category.

The paramedical exam checks for cotinine, a byproduct of nicotine in the metabolic system. The Human body takes at least 34 hours to get rid of cotinine while most particles take around two to five days.

Basic tester kits can only detect cotinine levels more than 200mg per milliliter. Most people are well within the safe limits after around three days of abstinence. But as insurance companies are switching to more sophisticated equipments which can detect a much lower level, therefore it is recommended to quite nicotine at least 3 weeks before a paramedical exam.

How to manage the blood and urine test?

No exam term life insurance is one such insurance policy where a person is only required to answer questions on health but there is no requirement for any test including blood or urine tests. These policies costs a bit more than regular policies and you are also required to answer the question truthfully.

In case it is found that you manipulated the information then the insurance company has the full right to cancel the benefits of the policy. In many cases it may not be easier to get an insurance coverage from another company, after this denial.

Remember that every insurance company has their own guidelines and following an age old saying that “honesty is the best policy” will surely get you an insurance policy that best suits your requirements.

Occasional users in good health can get no exam term life insurance for 10, 15, 20 or 30 years. Knowledgeable and experienced agents can easily find an insurance policy that meets all the requirements for marijuana users. A good insurance agent will always be ready to discuss the details of the policy with a prospective customer.

Once the person has decided upon the insurance he or she want to enroll in, it is just a matter a time before he or she is enrolled as the process is simple with no paper work. Just answer few questions on your online application form and you are done.